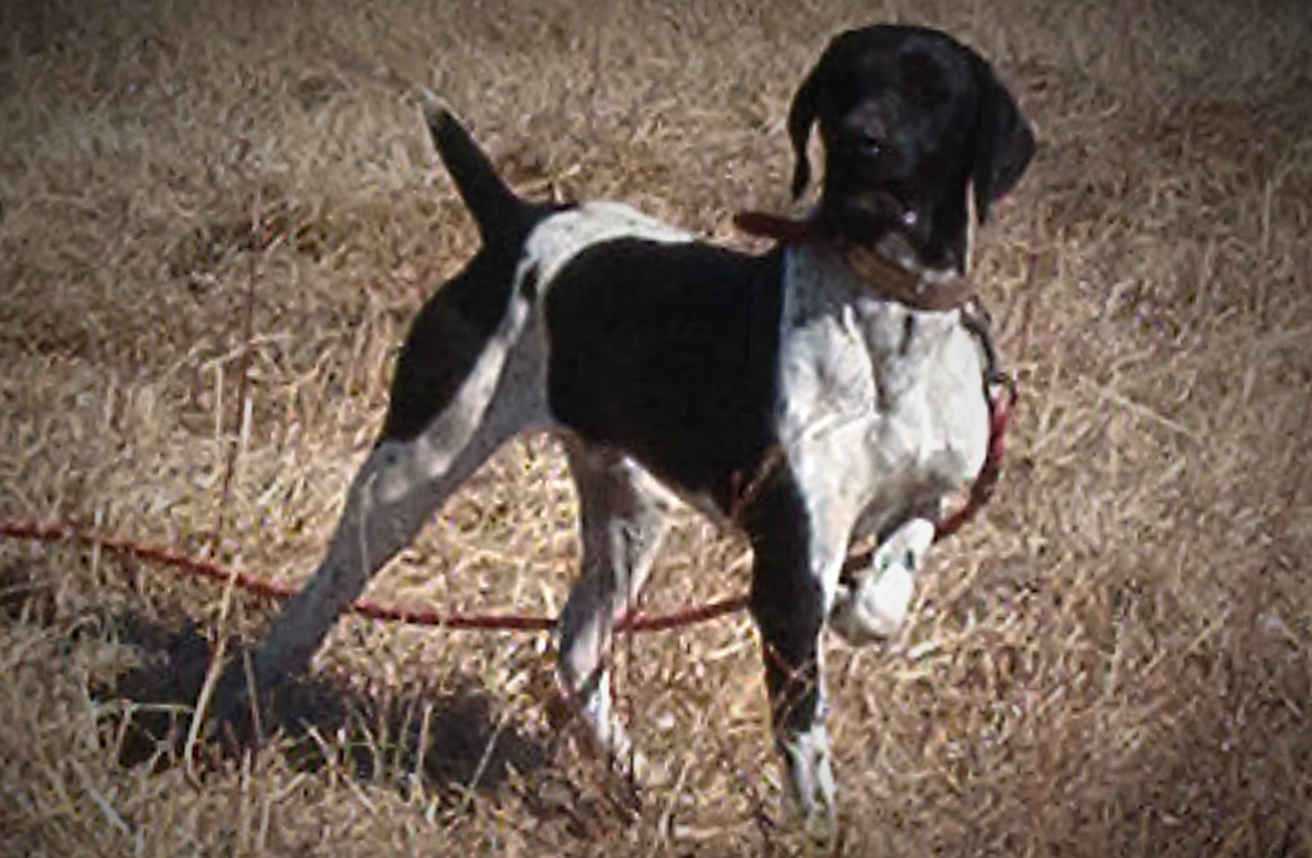 Muddy Creek runs into the North Fork of Spring River. We live on Duvall Creek which would make us Duvall Creek Kennel except for a guy named Bud Beck. Bud at the time was about 75 years old and he was Muddy Creek Kennel long before I was. I obtained this dog that Bud had raised. Bud was an avid field trialer. At the time I didn't know Bud well but knew of him. People are into field trialing for different reasons and Bud was a breed purist. Breed student and self appointed breed steward. He even spoke German to his dogs! Bud was very adamant about pointers being bred to German Shorthairs. Some say these dogs are just English Pointers with a cut off tail. I am not a breed student and haven't been around as long as Bud so who am I to say whether some of these dogs are actually English Pointers or not? I do know that it doesn't take much to cut off a dogs tail, and I suppose if someone wanted to call an English Pointer a German Shorthair Pointer it would be pretty hard to tell one from the other in some dogs if their tail was cut off. Especially those kind with the pink spots on their nose.

But anyway.... Bud cared about such things and this dog that I had acquired, Bud had raised him and Bud had retained the registration papers when he had made a gift of the dog to the fellow I acquired the dog from. I went to Bud, introduced myself,and proceeded to explain to Mr. Beck how I had obtained this dog and really would appreciate his registration papers "Please!". Well Bud explained to me real quick that he raised that dog, I wasn't supposed to have him and no unknown upstart quail hunter that might breed his dog to a English Pointer was going to get into his bloodline. Well, I had other ideas as this cull of Bud's was about the best birddog I had ever seen. I had two females and I wanted some puppies, but there was no way Bud was going to have his blue nose babies disgraced by some common quail hunter making gun dogs out of them. This went on for a couple of years. I'd stop by and ask, and Bud would say "NO!"....
I bought some dogs from John Blurton at Independence, Kansas and one of them was a real nice Moesgaard female and I got the idea that maybe if Bud was impressed with me having this dog then he might give me my dogs papers. It worked! I sent a copy of her pedigree to Bud and asked if he would be interested in raising a litter with her from his stud. About two minutes after he opened the mail Bud called me and said yes he sure would like to get some pups out of her. I took her over there and she went floating around the yard, prancing and throwing her front feet out as pretty as could be. After Bud got through oohing and ahhing I said, "You know Mr. Beck you really ought to let me have the papers for my dog."Bud didn't say anything but went in the house and handed me the papers when he came out. I said ..... "THANKS!!!"
Bud decided I wasn't going to breed his dog to any English Pointers and that was the start of our friendship. We always got a little tense over what a class bird dog was but then he was a field trialer and I'm a gun dog breeder. But through it all Bud did pass on his approval of my efforts by bestowing to me his name Muddy Creek and his sign is now at my driveway. By the way, I never did duplicate "Ole Buckeroo Bonzi" but there are now a whole lot of people out there hunting with his "greats" and "great greats" saying the same things about them that I had to say about him I am sure...
My personal guidelines in attempting to raise top-notch bird dogs for people to enjoy as hunting buddies and friends are the following:

Muddy Creek Kennel is a Gundog Kennel. Which means that we are primarily interested in hunting dog qualities. I support NAVHDA and NSTRA.... But these dog games are only just a reflection of a good bird dog! A seasoned old veteran bird finder might get a chuckle out of an NAVHDA hunt test.

Bud has been gone for years now. My Dad passed away in 2005 and Bud was not long after Dad. Bud had every single issue of the old GSPCA "Shorthair" magazine and Bud was a regular encyclopedia of German Shorthair pedigrees. Bud could also always tell you if a dog was bred and going to have puppies. He could poke around and always tell you yes or no. Bud retired US Navy, was Chief of Police Jasper,Missouri and owned the Western Auto Store in Jasper. Bud was a self appointed breed Stewart for the German Shorthair Pointer. Bud believed every  breeding should better the breed and would throw a fit if he looked at a pedigree that he knew was not a selectively bred dog. He called them "goats".

German Shorthaied Pointers for sale at their best since 1986