A few years ago we decided to go Elk hunting that year. On the way out there Daniel was saying he didn't feel good. Mike Mitchell, his son Jared, Daniel and me went in a Burger King somewhere in Nebraska and ate some double Whoppers. We were walking to the truck and Daniel up chucked his Whopper and fries in the parking lot. We all said we guessed he was telling the truth about not feeling good. He did it again in the Pizza Hut that night in Laramie, Wy. I called Elizabeth and she said give him some Ibuprofen. He seemed to feel better. We got on out to Clark, Colorado the next day. We set up camp and settled in. Daniel kept throwing every thing up he tried to eat and after a couple days waiting to see if he was going to get to feeling better we decided we should head for home when he didn't get to feeling better. We got home and I took Daniel strait to the hospital. The doctor said he had pneumonia and would have to stay. So we got him settled in and soon determined there were other problems. He had what is called a empyema. They sent a helicopter after him and took him to Kansas City. Ended up a two week ordeal with two surgeries. This is not a story about Daniel being sick, a screwed up Elk hunt or a two week stay in Kansas City. What the story is about is how miracles still happen today!

I got up to Kansas City late that evening and they already had prepped Daniel for surgery. I could tell it was an emergency surgery situation because they did the surgery at 1:00 AM. He was a sick boy. That surgery was not successful and they began doing cultures, etc. Days began to go by. Elizabeth was holding down the fort and she reminded me that some folks were scheduled to be at our place the next morning to look at a dog. I said " I'm sorry I forgot all about them, just take the dog out to the bird field and throw down a bird for him to point". She said no big deal but what was she going to do about shooting him a bird. I told her don't worry about it just let him point a bird and if they like the looks of him that will be enough. You would think that Elizabeth would be able to shoot a shotgun. She won't. The people came to see the dog I had sold them and Elizabeth explained that I was at Kansas City with Daniel and they were stuck with her to show them their dog. She took them out to the bird field with the dog and threw down a bird for him to point. She explained that she couldn't shoot and they would just have to trust that the dog would retrieve. The man and his wife were concerned about not being able to see that the dog was not gun shy and would actually retrieve. She said the dog ran by the bird she had planted and he slam dunk hammered a beautiful point. She goes over and flushes the quail. Now here is the miracle... Elizabeth flushes the bird, a red tail hawk swoops down, snatches the bird in the air and lands with the bird on the ground fifty-sixty yards away. The dog b-lines over there and the red tail flies away, he snatches up the bird and retrieves the bird strait to

Elizabeth to hand. Elizabeth said it was really cool, everyone had fun and they said after seeing the show they weren't at all worried about him being gun shy. Problem solved! They did a successful surgery and after a few days of recovery we got to come home. From the day we left to leave for Elk hunting until the day we got home was going on a month. Heck of a deal.

Now here is the thing... I have trained dogs in that same bird field since 1986. I would say that over the years that we will probably average working dogs twenty days a month. On an average we work fifteen dogs per day. Three hundred dogs worked per month. Three thousand six hundred dogs worked per year. Seventy two thousand dogs worked in the past twenty years. If we shot an average of two birds per dog worked, we have shot approximately one hundred and forty four thousand quail in that training field. In 144,000 flushes not  once has a Red Tail Hawk flew down and snatched a bird out of the air. Of course their mothers taught them better than that and they are smarter than to fly down and try to snatch a bird away from a guy with a shotgun. You can decide for yourself if a lady in distress that can't shoot and had to show a bird dog to some concerned customers received miracle assistance... or not? You know what I think? I think I could train in that same field for another twenty years and no Red Tail Hawk is going to fly down and snatch a quail out of the air for me that a dog pointed, but... if he does I am going to shoot his butt.

German Shorthaired Pointers at their best since 1986 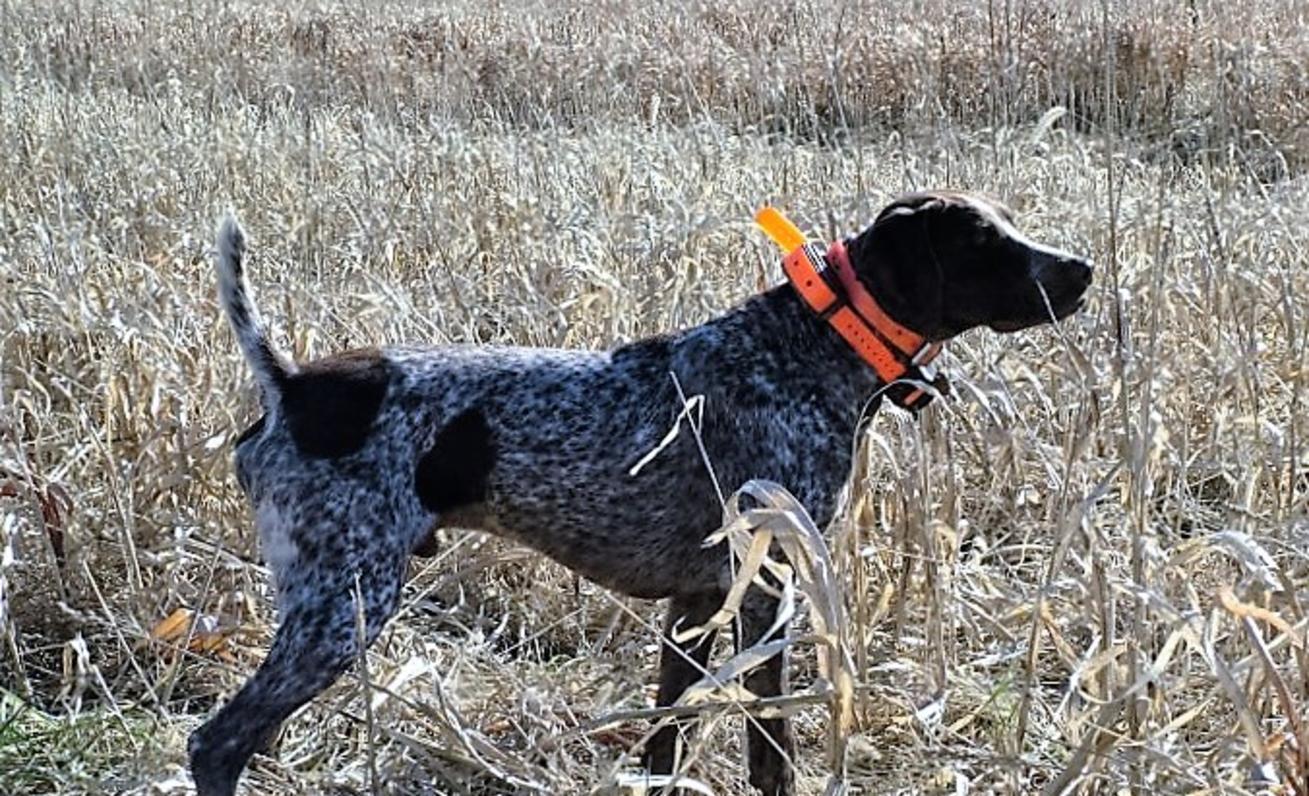