What are different options for registering your German Shorthaired Pointer? What is the difference between one registry and another? Why would I choose to register my German Shorthair with a particular registry versus another?

There are numerous different registries available for any type breed of dog. Pet dogs of any breed, hunting dogs of any breed and performance dogs of all breeds. Most  all of these different registries will/do recognize each of the other known registries and often a dog will/might be included in more than one registry depending on the particular interests and pursuits of the dogs owners. The registry they would use would be determined by their individual interests, whatever they might be. In relation to the German Shorthaired Pointer a person involved in BDC would not have any interest in NAVHDA or AFTCA participation probably but... should they develop an interest NAVHDA or AFTCA would be happy to include their dog in the NAVHDA or AFTCA registry and welcome their participation. Each of these different venues all require dogs participating in their particular "game" to be included in their own particular registry and most all registries have Open or Individual inclusions for the purpose of recognizing dogs registered with other known registries. There are "all breed" registries and there are "performance dog" only registries but, in the case of the German Shorthaired Pointer there are registries specific only... to the German Shorthair.

The first and oldest registry is/was American Field and the Field Dog Stud Book (FDSB). The Field Dog Stud Book is the oldest purebred dog registry in the United States. Its records date back to 1874 and comprise several million dogs. When we think of famous dogs such as Elhew Snakefoot or Riggins White Knight or even the very sport of field trialing birddogs, the  American Field and (AFTCA) Amateur Field Trial Clubs of America are/were the beginning and foundation of all field trialing in the United States. When we think of Hall of Fame or Bird Dog Museum we are talking about the Bird DogFoundation and National Bird Dog Museum for Pointing Dogs,Retrievers and Spaniels. If you enjoy reading about bird dogs and bird dog information in general I recommend that you subscribe to American Field Magazine which is a weekly publication that you will look forward to and enjoy. National German Shorthaired Pointer Association (NGSPA) is the German Shorthaired Pointer parent club with the American Field and Amateur Field Trial Clubs of America in the promotion and development of the German Shorthaired Pointer breed within a competitive venue. Without these formative interests we would not have the quality breeding we are so fortunate to have within the German Shorthaired Pointer breed. Family member, hunting companion or competition, quality breeding is established within the standards of trialing.

National Shoot To Retrieve Association (NSTRA). The National Shoot To Retrieve Association (NSTRA) was founded by a group of dedicated bird hunters looking for a way to extend the fun they enjoyed with their bird dogs after the regular hunting season ended. Field Trials, under hunting conditions, were the answer. Field Trials provide an extended "hunting" season, a sportsmanlike environment and competition with others who enjoy bird dogs. The Association was incorporated in 1978. NSTRA is a non-profit association with service to the members and sportsmanship as its goals. The NSTRA organization has grown to a place today that "Shoot to Retrieve" has became a way of life. Dogs and handlers enjoy competition and thesportsmanship that comes with organized "hunting". NSTRA does not have their own registry but use the well know registry the United Kennel Club (UKC) as their means of record keeping. UKC publishes NSTRA championships and titles within their registrations and pedigrees. While UKC is not a NSTRA registry they are the official registry for the NSTRA organization.Established in 1898, the United Kennel Club is the largest all-breed performance-dog registry in the world, registering dogs from all 50 states and 25 foreign countries. More than 60 percent of its nearly 16,000 annually licensed events are tests of hunting ability, training and instinct. UKC prides itself on its family-oriented, friendly, educational events. The UKC has supported the "Total Dog" philosophy through its events and programs for over a century. As a departure from registries that place emphasis on a dog’s looks, UKC events are designed for dogs that look and perform equally well. Single dog registration

National Bird Dog Circuit (BDC) or Bird Dog Challenge as seen on the Outdoor Channel. BDC has their own registry and require participating dogs to be registered. "The mission of the National Bird Dog Circuit is to offer the finest competition bird dog hunting experience throughout the United States. We will do this by providing fair, fun, family friendly and professionally managed events. Competitors of all ages and skill levels can test their abilities, showcase their exceptional dogs and receive recognition for their accomplishments. We stress safety, integrity, courtesy, professionalism and respect. We will balance cost and awards to make the BDC experience widely and affordably available.The National Bird Dog Circuit has a broad scope and appeal. This is true whether discussing the divisions offered at our tournaments; youth to Masters, our geography; upstate New York to Southern California, the number of states where our members reside; 27 plus 2 Canadian Provinces or simply the number of states where tournaments are hosted; 24. The National Bird Dog Circuit has something for everyone. It is “The Ultimate Challenge”

American Kennel Club (AKC). GSPCA German Shorthaired Pointer Club of America is the AKC parent club for the GermanShorthaired Pointer breed. "Club information, top ten listings, articles, trial and show results, rescue information and merchandise. AKC promotes tests, trials and standards established by the GSPCA". AKC requires all AKC event participants to be registered with the AKC registry. AKC is the only venue within the German Shorthaired Pointer breed that promotes a divided standard for the breed. All other venues adhere to a "form follows function" perspective while AKC and the GSPCA presume a more direct approach in that they promote a division within the breed following the show vs. field mentality.The AKC is also the only venue available that provides for the promotion of pet/companion dog attributes within the breed. Agility and Companion. Many German Shorthaired Pointer owners have their dogs ancestry reflected through the AKC registry and pedigrees reflect AKC participation/accomplishments.  Single dog registration

North American Versatile Hunting Dog Association (NAVHDA).  The NAVHDA Registry is the only registry in North America specializing in the registration of versatile hunting dog breeds (German Shorthaired Pointers). Each dog registered with NAVHDA receives a certificate including a three generation pedigree showing test results and available hip dysplasia information. This places the emphasis on selective breeding of sound hunting dogs. Participation in NAVHDA tests/evaluations require that the dog must be registered with the NAVHDA registry. NAVHDA has established it's self as a premier evaluation/function venue for hunting dog characteristics/ability within the German Shorthair breed. Single dog registration

United Field Trialers Association (UFTA) "The United Field Trialers Association provides a competitive venue for dog handlers who appreciate having a fair and consistent system for measuring their dogs performance. The UFTA's scoring system for field events eliminates potential error or bias on the part of the judges". UFTA does not have their own registry but use an old established registry the United Kennel Club (UKC) as their means of record keeping. UKC publishes UFTA championships and titles within their registrations and pedigrees. While UKC is not a UFTA registry they are the official registry for the UFTA organization. Established in 1898, the United Kennel Club is the largest all-breed performance-dog registry in the world, registering dogs from all 50 states and 25 foreign countries. More than 60 percent of its nearly 16,000 annually licensed events are tests of hunting ability, training and instinct. UKC prides itself on its family-oriented, friendly, educational events. The UKC has supported the "Total Dog" philosophy through its events and programs for over a century. As a departure from registries that place emphasis on a dog’s looks, UKC events are designed for dogs that look and perform equally well. Single dog registration

Vereinigter CanAm Deutsch Kurzhaar Klub (VCDKK) United Canadian American German Shorthair Club.  The focus of the VCDKK is to promote the Deutsch Kurzhaar (DK) through proven and established performance testing and breeding practices in order to preserve the integrity of one of the worlds’ premier versatile hunting companions. Under the umbrella ofthe DKV,the VCDKK adheres and abides by the strict testing rules of the Jagdgebrauchshundverband e. V. (JGHV) and has drafted by-laws that reflect and emphasize breeding regulations and practices that are important to the consistent development of a capable and biddable versatile hunting dog.

Deutch-Kurzhaar-Verband E.V. (DKV) A Short History..."The breed’s particular assets are a far reaching nose, impressive, firm pointing, willingness to track down, retrieving, following blood scent, toughness, endurance and passion for water hunting. All of these attributes are absolutely set in stone by the breeders. The breeders of our versatile hunting dog have made an enormous contribution to today’s appearance of the Deutsch-Kurzhaar through close observation of the hunting specifications as well as their knowledge and experience. They were supported by the founders and the club presidents in their efforts to achieve the best possible results. With diligence and German thoroughness they jointly helped the Deutsch-Kurzhaar acquire today’s significance. In Germany the Deutsch-Kurzhaar is the most common versatile hunting dog next to the Deutsch-Drahthaar. A downright enthusiastic upward trend can be observed not only in Europe, but far beyond the borders of Germany. The DK thrives on its growing popularity on all continents. The yearly test statistics in the German Versatile Dog Registry of the JGHV e.V. clearly substantiate that the DK achieves excellent results in comparison to all other pointing breeds. In relation to the registered whelps the Deutsch-Kurzhaar almost always is at the peak of accomplishment with its wide-ranged performance spectrum".

German Shorthaired Pointer breeding at it's best by Muddy Creek Kennels since 1986. 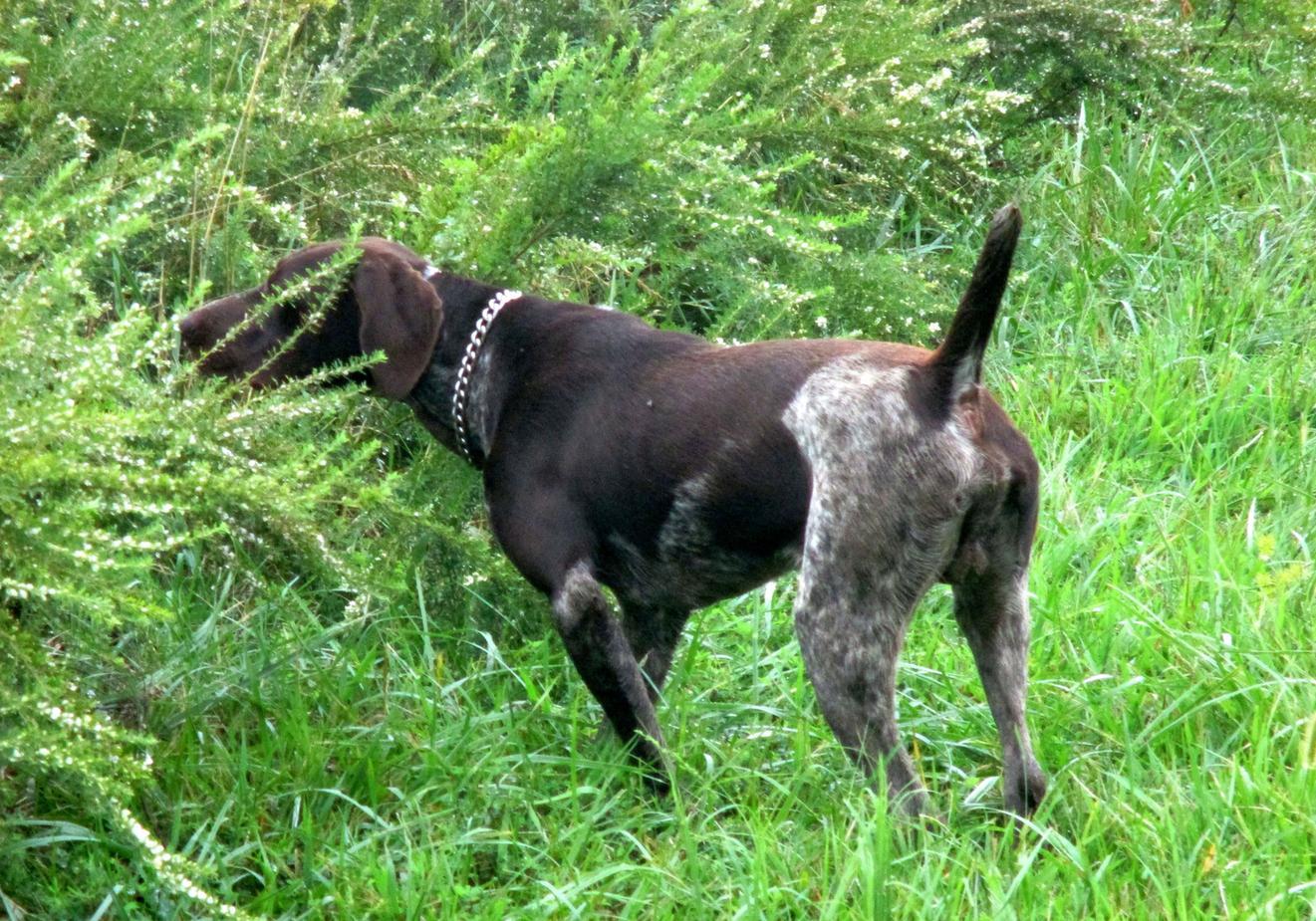