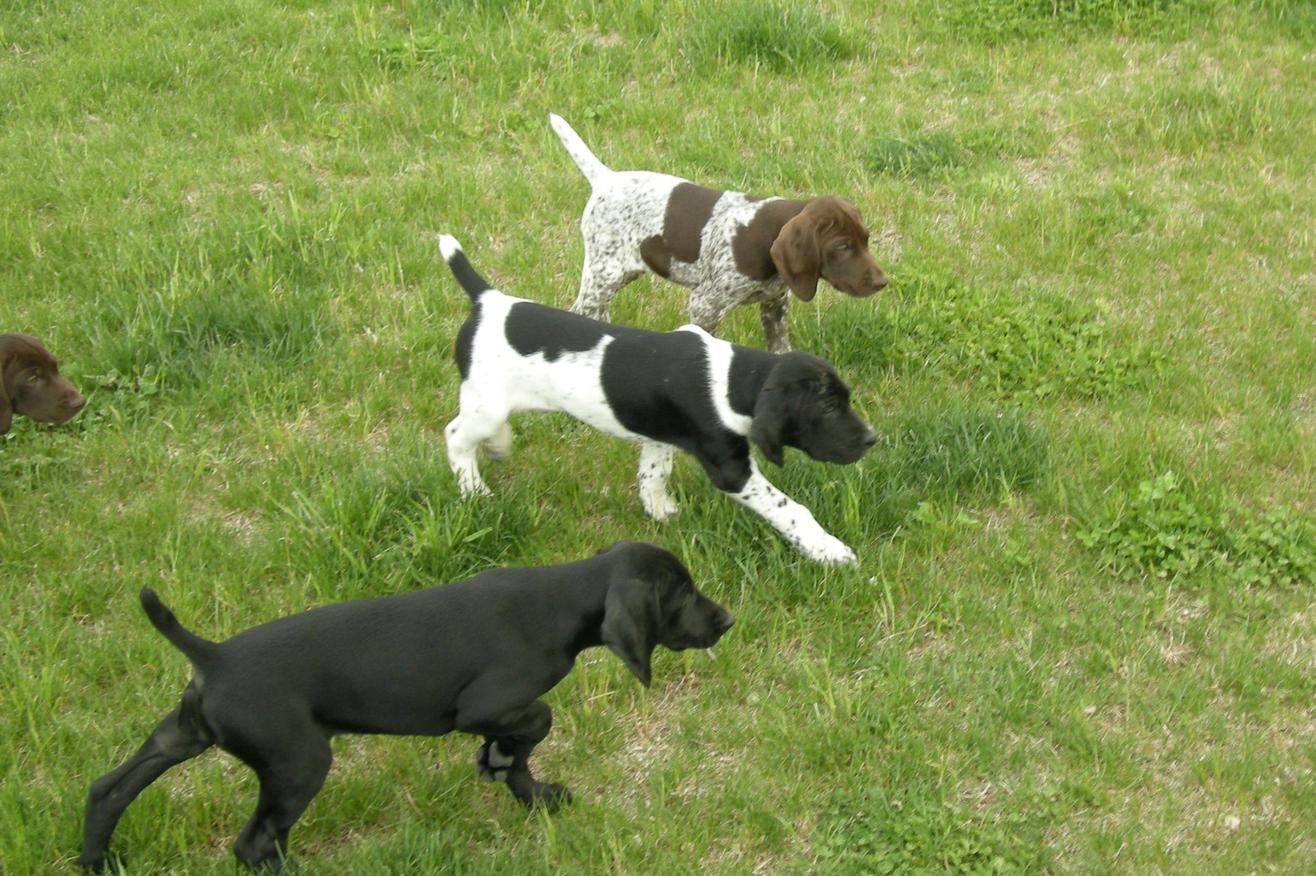 German Shorthaired Pointer Puppies for sale at their best since 1986.

"....this sort of profiteering, or whatever you choose to call it, has been going on in one breed or another for decades, perhaps centuries. In the 1930s, when Rin-Tin-Tin movies were popular, the German Shepherd went  through a surge in popularity and back yard breeding damaged the breed extensively. The next victim breed was the Cocker Spaniel through the 40s and was totally destroyed as hunting dogs. Of course the most famous exploitation was that of the Weimaraner in the 50s. Irish Setters in the 60s. For the past thirty years, both the Labrador and Golden Retriever have been victims...and continue to be. Happily, after the fast buck breeders move on the conscientious restore the damaged breed. Happily, also, during the frenzy of fast buck breeding in each of these breeds, anyone who wants a decent representative of the breed has always been able to find one. I am sorry that it is the German Shorthaired Pointer that is going through it now. It is a wonderful breed that has been kept quite clean from the start.
I have written extensively about how to select a good puppy in books and countless magazine articles, as have many other dog writers over the years. We hope to do some good but, we can't help anyone who doesn't want to be helped...."
James B.(Jim) Spencer

Jim Spencer said... "we can't help anyone who doesn't want to be helped". There has been many, many books and magazine articles written on "how to pick a pup", but I am seeing more and more the "how to pick a pup" process going by the wayside as more and more peddlers come along... more and more of these "breeders" do not even have facilities or game birds to show a bird dog and are not even able to demonstrate the abilities of the dogs/puppies they are wanting to sell... They used to be called "back yard breeders" and the oldest sales pitch there is for someone selling puppies is to claim... "both the parents are really good hunters". Imagine anyone saying..."the parents of these puppies have never been trained or proven as hunting dogs".

We have raised and trained German Shorthair Pointers for going on twenty five years professionally and I can say that unless the litter of pups is a repeat breeding and there are proven dogs that have been trained from a prior breeding there is no  guarantee that the pups will be good ones. I don't care what anyone claims....you breed good ones to good ones hoping for good ones and if they turn out to be good ones you breed them again. If not you don't. I can't see where these many "breeders" that raise puppies out in their back yard can even know anything about how good of bird dogs the dogs are that they are raising the puppies out of if they are not training the dogs they are raising the puppies from. They have no training facilities, they have no birds to train with and they have no program for developing bird dogs. We were around long before the internet.We were raising and hunting with "good" bird dogs long before we were Muddy Creek Kennels. Raising "good" bird dogs to hunt with is still what we do. I'm not against the internet but in the case of "bird dog" breeders, kennels, trainers it has sure muddied the water for everyone that is trying to get a "good" German Shorthair Pointer bought or trained.
We are happy to take all the time it takes to look at dogs/pups and help pick a good one. We sell the same puppy that we would train and sell as a trained dog. Selling bird dogs is our family business and we want our customers to get the best dog they will ever have from us....